There’s not yet a lot on this page about David Di Sabatino, as he hasn’t been my main focus in building this web site. I am steadily collecting information about him as a person and public figure, but my goal is to debunk the innuendo, half-truths, rampant speculation, and unsubstantiated rumors that Di Sabatino has put forth in his so called “documentary.” 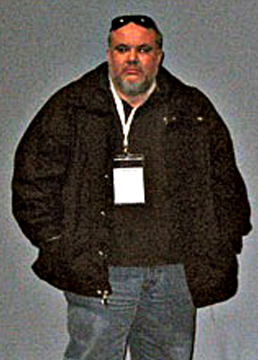 David Di Sabatino has been obsessed with Larry Norman for years, or so it seems. He first started presenting his theories as fact in a bibliography he compiled, and later in Internet discussion lists. When Larry artfully took David’s theories apart, and then basically offered access to many of the documents I am citing here plus the opportunity to interview Larry and his whole family, David did not accept the offer, apologize or make any sort of statement. He just retreated and waited awhile before reintroducing his imagined scenarios all over again to a new crowd. I presume that Di Sabatino thinks he can now trumpet his theories without the hindrance of the truth being that Larry Norman is no longer around to defend himself. Di Sabatino admitted this himself.

In a February 2009 email thread in which Charles was warning Di Sabatino that slander against Larry wouldn’t be tolerated, David replied

I’m not a lawyer obviously, but from what I understand you are making threats about things that would not get you to first base in a court. Since Larry is dead, defamation and privacy claims cannot be brought.

Again I ask what species of Christianity is this?

One of the first public encounters between Di Sabatino and Larry Norman occurred in March of 1999 on a Jesusmusic.org Internet music discussion list. Di Sabatino had accused Larry of many of the same things he covered years later in the Fallen Angel movie. Larry responded to these accusations clearly and eloquently. The following documents are lengthy but well worth reading. They are the closest thing to a response to the Fallen Angel movie that we’re going to get from Larry Norman himself. And I think they also offer insight into David Di Sabatino. The younger David that Larry addresses in these messages is the exact same older David that I observe in current statements and interviews. If you’ve read any of his recent interviews or publicity maneuvers you’ll know what I mean.

Here is Larry’s reply to Di Sabatino’s accusations over a decade ago. Click for a PDF file.

Larry also felt moved to defend himself against statements Di Sabatino had made in a bibliography he had compiled. Click for a PDF file.

A few days after posting these messages to Di Sabatino, Larry apologized wholeheartedly for responding at all. He felt that the duty of a Christian is to pray for someone, instead of to respond to their accusations and debate with them. Click for a PDF file.

For a time after that chat room encounter Di Sabatino was silent. But with Larry’s passing in 2008, David starting spreading rumors again, this time with a movie that rehashes many of his same old theories and speculative conclusions. But he didn’t stop there…

But Wait, That’s Not All!

Here is a brief list of what David Di Sabatino has been up to during the making of the movie and in the years leading up to it. I’ll expand on each of these points in the near future as time allows.

Di Sabatino’s friend Andrew Wallace has has been openly proclaiming and repeating this idea in public Internet postings. “if it makes you happy I will go on the record .. Yes, I believe that Charles is Larry’s eldest son based on a number of strong indicators.” When someone replied saying that it was a crazy allegation, Wallace retorted “Crazy allegations ?? .. this time last year the fact that Larry had a son in Australia was a “crazy allegation” but I think most people can see that we are not into baseless statements.. our track record and determination in regard to Daniel is proven .. The matter of Larry’s other son, Charles, is not our issue!!”

I emailed Charles and asked him what he thought about David Di Sabatino’s strange assertion. He replied “Yeah, I’ve heard that Sabatino and the Wallaces have been saying that. I think they are lunatics. It would almost be funny if it wasn’t an insult to my parents. And the Wallaces wonder why their credibility is questioned by so many? They’ve been claiming that Daniel Robinson is Larry’s son. They claim that I am Larry’s son too. What’s wrong with these people? They’re quite tiresome, but I’m glad that their “track record” speaks for itself.”

UPDATE – July 2010: Since this page was first published, David Di Sabatino has claimed that the birth certificate has been “doctored” and that he has seen a “different” birth certificate for Charles Norman that contradicts the one posted here. Both he and Andrew Wallace still refuse to retract their errant statements since it would damage their credibility. In light of their refusal to admit that they were wrong, I have posted undeniable photographic proof that they are wrong. YOU CAN SEE THESE PHOTOS HERE:

Recently, Di Sabatino got into a conversation / argument with someone who was questioning his line of logic. Apparently, another bizarre theory going around is that Larry Norman was contractually signing other popular artists to his record company so he could waylay their careers, thus keeping himself the most popular Christian artist. When questioned about this and asked for evidence, Di Sabatino got into the following dialog.

You can read the transcript here. It’s an interesting way for Di Sabatino, who studied theology and led worship services, to communicate with someone who is merely questioning his speculative accusations.

The Letter of the Law

Concerning the copyright issues with using Larry Norman’s music without permission in Fallen Angel, Di Sabatino claims that he “won the legal challenge” brought about by the Normans. When asked about his legal actions in a recent Cross Rhythms Magazine radio and online interview with the public, Di Sabatino replied with a non specific answer:

[WilliamT] 12:29 pm: David, why did you sue Solid Rock in a California court?

David has repeated this several times, as if one can simply “ask” a judge to make a decision on something. Here’s the truth about the legal skirmish. Charles Norman contacted Di Sabatino with a proposition, that any legal objection to the untruthful assertions in the film could most likely be avoided if David would simply send him a copy of the film. Charles wrote “I’m hoping, eager even, that upon viewing your movie I’ll be able to overlook the shortcomings in the veracity of these assertions and set aside any legal objections in light of the big picture. If you’d like to meet figuratively on neutral ground, please send me a copy of the film this week and give us both an excuse to make some lawyers less than happy :-(“

When Fallen Angel was finally released to the public, on March 1st, 2009, Charles Norman issued a cease and desist notice. Di Sabatino had not asked permission to use Larry Norman’s music and other copyrighted items such as photographs owned by Solid Rock (Which is what David did with Larry’s music in his first film, Lonnie Frisbee: Hippie Preacher). Di Sabatino had, however, asked the permission of other people who contributed their copyrighted material, and in some cases paid them for their material, but he did not ask Solid Rock.

Rather than replying to the cease and desist notice by contacting anyone at Solid Rock or trying to suggest compensation for the copyrights, David Di Sabatino decided to take a much more heavy-handed approach.

A strange response, indeed. Especially for a movie subtitled “A Bible story.”

On May 19th, 2009 Di Sabatino for some reason declared in a Yahoo chat group that he had “won the legal challenge.” This is nowhere near the truth as it didn’t go before a judge until nearly two months later.

In July, after weeks of drawn-out negotiation and at least one cancelled film festival showing, a settlement agreement was arrived at. Di Sabatino and Norman settled the case out of court. Norman refused to consider taking any money, not wanting to sell out his brother’s legacy. Instead, he just wanted to walk away rather than get bogged down in a protracted case in a court nearly 1000 miles from his home. The case was closed by a Stipulated Consent Judgment, meaning that Charles Norman decided to concede on the condition that Di Sabatino adhere to a few of Norman’s stipulations, one of which was that Di Sabatino stop using the Larrynorman.net web address.

In an email to me, Charles Norman stated “Sure, we could have fought David’s unauthorized use of the material we own, but it would have taken a long time and cost upwards of $50,000 in up-front attorney retainer fees. In the end I decided against wasting my time on a movie that practically nobody is going to see and that most people who do will realize that something’s very fishy about it. So we decided to turn the other cheek and let the movie flop on its own merits.”

You can request the transcripts of Di Sabatino’s lawsuit against Solid Rock and the attached stipulated settlement agreement by contacting the Clerk of the District Court and referencing the case number.

The lawsuit documents are a matter of public record, but far too lengthy to post here.

Pam Newman had an interesting encounter with Di Sabatino while he was putting together his movie. Here are some “fair use” excerpts from two emails Pam sent out after seeing the movie’s premiere in San Jose, California.

“HE TOLD MY FRIEND THAT HE PLANNED TO DESTROY LARRY NORMAN WITH THIS MOVIE.”

I’VE LEARNED SO MUCH, HOW A PRODUCER CAN SPLICE AND CHANGE THINGS AROUND TO MAKE SOMEONE LOOK GOOD OR BAD.”

David Di Sabatino appears to practice the very activities he accuses Larry Norman of in Fallen Angel and other media outlets. Read some of David’s claims on the Internet and think about his actions. Then look at the following things that David has said about Larry:

“Part of Larry’s dysfunction was that in order to hide some of his bad behavior, he would threaten and bully anyone who was threatening or questioning his created reality.”

“He was deathly afraid of the truth coming to the surface. His closest friends say this fear was worse to him than the threat of hell itself.”

“For years I’d watch him throw the first punch then run into the corner, put ashes on his face and claim the other guy started it.”

“Slander is a poison which kills charity, both in the slanderer and the one who listens.” Bernard, St. on Slander

Stay tuned for more information. Until then….