Fallen Angel portrays Pam Norman, Larry’s first wife, as a helpless victim in her marriage to the “difficult” Larry and implies that Larry left her for Sarah Stonehill with whom Larry was supposedly having an adulterous affair. Pam’s onscreen appearance is quite a performance by a professional actress (also here). However, the truth is that it was not Larry but Pam who had an adulterous affair and when Larry found out he had her served with divorce papers, as the following documents reveal.

The Truth Is Stranger Than Di Sabatino’s Fiction

February 20, 1980 – With divorce papers already served on her three months previously, Pam writes to Larry “I’m sorry Larry. I know I have sinned and hurt you too. I wish the words I’m sorry would make all the pain go away and everything alright. It use [sic] to, but it doesn’t now.” “Oh Larry, I’ve only wanted to be loved by you and your lady at your side. I know I went my own direction and other guys entered the scene but it was out of a tremendous need to be loved.” – click for PDF.

March 12, 1980 – Pam writes to Larry “The separation has been good. I’ve done a lot of thinking and see how wrong I was. I’m sorry for hurting you. I can’t re-do the past. I made mistakes, many. I sinned and now I am reaping the seeds sown.” – click for PDF.

May 22, 1980 – A cassette recording of a conversation between Larry and Pam is made with Pam’s spoken acknowledgment that the conversation was being recorded. In this recording Larry addresses the issue of thousands of dollars in royalty checks and other checks to Larry that Pam has embezzled and stolen. A disappointed Larry expresses his inability to trust Pam after years of deceit and selfishness. Pam says she is sorry and then admits that shemight do it again if Larry’s royalty checks were to come into her possession, and she agrees that she’s an opportunist.

In these audio recordings, Larry expresses that he still has hope that Pam will change and that he is hoping that their marriage can still work out, even if at the last minute. Pam says nothing. Larry brings up Pam’s lies about drug use.

Here are excerpts from the lengthy tape recordings, along with transcripts. If there are any legitimate, reputable journalists from Christian publications that wish to hear the entire recording, please contact me at the email address listed on the FEEDBACK page of this site.

Excerpt 1 – Larry explains to Pam why he is taping their conversation.

Excerpt 5 – Pam wants to know how Larry found out about her misappropriation and theft.

Excerpt 6 – Pam talks about the problems Larry was having with Phillip Mangano and others at Solid Rock, her acknowlegement that Solid Rock is destroyed, and how she understands how Larry would feel betrayed and used. Larry still has hope that Pam would repent and expresses his dismay when he discovered that shestill wasn’t showing any signs of changing even after a six month separation.

Excerpt 7 – Pam says she felt that she was drawing closer to God and that God provided her with the royalty checks for her to steal.

Excerpt 8 – Pam says she might steal checks again if given the opportunity, and Larry says he doesn’t want to prosecute her because he doesn’t believe in going to court.

Excerpt 9 – Larry expresses that he is watching Pam closely and offers her a last minute chance at reconciliation  Pam says nothing.

Excerpt 10 – Larry equates Pam’s lies about stealing the checks to her lies about using drugs while they were married.

Excerpt 11 – Larry quotes from the Bible, Mark 10:9 regarding the sanctity of a Godly marriage instead of a false marriage as Pam seems to have subscribed to. 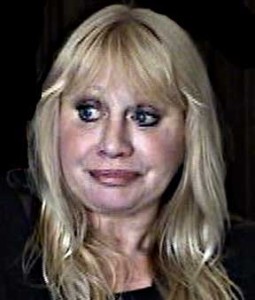 June 23, 1980 – A request and declaration for final judgment of Dissolution of Marriage between Larry and Pam is entered into the Superior Court of Los Angeles. The divorce isn’t finalized until late August of 1980. – click for PDF. In the meantime, Pam has been dating other men and has decided that she is in love with Joey Newman, a musician with the Osmond family singers. (See August 8 entry below.)

July 2, 1980 – Pamela signs a document paying Larry $900 as partial restitution to Larry for her illegally endorsing Larry’s name on royalty checks worth thousands of dollars. – click for PDF.

August 8, 1980 – In a file copy of a letter Larry sent to Pam just days before their divorce is final, Larry expresses his disappointment that even the seriousness of a separation still hasn’t slowed down Pam’s involvement with other men, particularly Joey Newman, musician with the Osmonds. – click for PDF.

August 14, 1980 – Larry receives an overdue letter from Os Guinness, noted Christian author, philosopher, and social critic. Guinness has spoken with Larry and Pam separately about their crumbling marriage and in this letter writes about Pam’s infidelities and her pursuing another relationship while still married to Larry.Guinness writes, “You were both very candid about the final break coming through Pam’s adultery… this is what concerned me most… Pam, you need close Christian brothers and sisters to whom you are accountable for your faithfulness to Larry in every situation, whether he knows about it or not.” – click for PDF (7MB) of the entire 6 page letter.

August 4, 1981 – A year after Larry and Pam’s divorce is finalized, Pam writes a lengthy letter to a friend where she confesses that her affair with another man while Larry was away on tour is what prompted Larry to have divorce papers served. Pam uses loneliness (Larry was off on a tour) as an excuse for her behavior. The letter was forwarded to Larry by the original recipient. – click for PDF.

Pam also talked about her past drug use and jet set lifestyle before she met Larry, in the September, 1972 issue of Decision Magazine. – click for PDF.

In one of Pam’s first interview segments in the film she again revises history when she recalls how she and Larry first met. Pam claims that Larry, after jumping off stage after a concert, walked up to her and said “I have to see you tonight” and then kissed her in front of the crowd. Pam then claims that the next day Larry looked her in the eye and said “God told me you were going to be my wife.” This is just one example of Pam distorting what actually took place. Here’s what really occurred:

Fall of 1971 – Pam makes a “comic book” where she recounts her seeing Larry onstage at a beach concert in California at which point “something inside her started saying “You’re going to marry him someday! He’s the one.” – click for PDF.

Now in 2009 the story Pam tells in the movie is that Larry walked up to her and said that God had told him that they would marry.