The United States Library of Congress has chosen Larry Norman’s album Only Visiting This Planet album to be deemed a National Treasure. The only other Rock album was U2’s Joshua Tree (an album depicting U2’s vision of America). What I love about this honor bestowed upon Larry is that the criteria for what music was chosen to be included in the Library of Congress had nothing to do with album sales or popularity, but rather, each album was deemed “culturally, historically or aesthetically significant.” Just try to imagine all the albums they had to choose from! 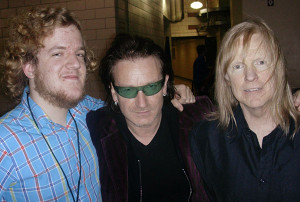 Librarian of Congress James H. Billington said of the significance of the registry “These recordings represent an important part of America’s culture and history.” As I know, and if you are reading this article you know, the art and life of Larry Norman contributed to shaping the culture within our small group of friends, but now the powers that be in America have recognized Larry’s contribution to the culture of the entire country.

Larry, now as long as America exists you will be forever remembered for what I remember you to be: A great artist who believed in Jesus, and who, inspired by America’s great artists Mahalia Jackson and Little Richard, Elvis Presley and  Bob Dylan, Herman Melville and Superman Comics, Robert Frost and Allen Ginsberg and countless classic movies; created a literature of music that shined a transforming light into the dark corners of my life and into the dark corners of America, and now will shine for all future generations.

Buy a copy today and give it to someone for Larry’s birthday!

Trilogy:tril·o·gy /ˈtriləjē/ Noun a group of three related novels, plays, films, operas, or albums. (in ancient Greece) A series of three tragedies performed one after the other.

Larry Norman, who was very interested in literature, both studying it and creating it, produced thre [...]